64 Zoo Lane Wiki
Register
Don't have an account?
Sign In
Advertisement
in: Characters, Animals, Residents of Africa,
and 7 more

Patsy the Porcupine (also known as "Cleopatra") is a female porcupine who lives in The Blue Mountain. She is thought to be a lioness when Reginald meets her. She is widely known as the best cleaner of Africa. She is also voiced by Anna Bentinck.

Patsy has spikes with black and white patterns and a purple nose. Her skin is color blue.

Patsy is usually very busy by tidying up the mess. Patsy is able to clean up the mess with her spikes. She is actually from The Blue Mountain to come to the savannah for a visit.

Whenever the animals clean up the mess without Patsy's help, Patsy is very happy with them for removing the mess. It is revealed that Patsy is one of the greatest cleaners of Africa.

Patsy in the opening song from Seasons 1-2

Patsy arriving in the savanna

Reginald is impressed by Patsy who arrives in the savanna 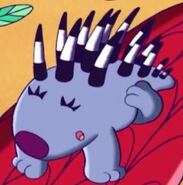 Patsy sad when Nathalie didn't want her to be her neighbor