64 Zoo Lane Theme Song refers to the theme song that is played at the start of each episode of the series. It is the opening song of the series. The song is sung by a children's choir and a female singer. The singer describes the details and behavior of many with the animals in this song.

The song opens with a door with the number "64" on it. We see the title "64 Zoo Lane" as we approach the door. Lucy opens the door as the camera stops moving. She talks to the viewers about her home and her very special neighbors.

The song begins with an image of a camel as the singer begins singing. The next 2 animals are a kangaroo and a hippo. The next image is a trio of the koalas on eucalyptus trees. They follow the tune of the chorus before the next image.

The next image has Toby and Doris playing together. Toby gets his tail caught by Victor. Victor gets bitten by another crocodile, which reveals to be Kevin. Several other animals are very happy for saving Toby. The next image has 3 flamingos in the savanna.

The camera goes up to the head of Georgina. Lucy starts petting Georgina on her head. We later hear the mother of Lucy telling her daughter to go to bed. The song ends when Lucy goes to bed.

Lucy: Hello, I'm Lucy. I live at 64 Zoo Lane. And I have some very special neighbors. Look!

Singer: There's one with a hump

And one who can jump

And one who is, well, a little bit plump

And some like it both ways and that's a bit silly

Singer: Some are friendly, some are scary

But one thing is sure not one is ordinary

Singer: Some are spotty

They're prickly and woolly and furry and slimy

Some are quite big

And some are very small

And the last one's Georgina, who's incredibly tall!

"Hello, I'm Lucy. I live at 64 Zoo Lane. And I have some very special neighbors."

Some are quite big

And some are very small

And the last one's Georgina, 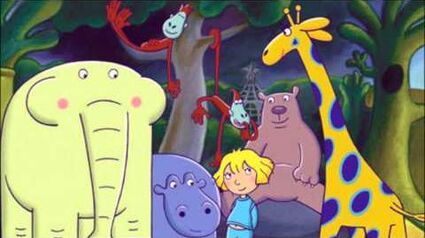