Africa is one of the main continents and settings of the episodes. It is a fictionalized version of Africa.

The savannah is one of the major settings in Africa. It is home to a grumpy African lion named Reginald. It also features an elephant named Nelson, a laughing hyena named Harry, a maternal ostrich named Audrey, and a very busy snake named Esmeralda, who lives in the burrows. Other residents include a very speedy zebra (Zed), a curious aardvark (Alan), and also some of the exotic birds.

The jungle is an African jungle which borders the savannah. It is home to a messy warthog named Herbert and 2 mischievous monkeys (Giggles and Tickles). It is also home to a hungry spider, a boulder-smashing rhino (Ronald), an oxpecker (the Tick Tick Bird) and a mischievous chameleon (Casper) and his granddad.

It is also known as "The Jungle Clearing".

The desert is another setting in Africa. It borders the savannah and the jungle. Besides a few parrots and a herd of wildebeests, 2 dromedary camels (Gary and Dennis) live in the desert. Unlike the desert in the real Africa, there are no Great Pyramids of Giza or the Great Sphinx of Giza (as Egypt is never mentioned).

The marsh is home to a trio of small animals (a tortoise, Toby; a crocodile, Kevin; and a yellow duck, Doris). The marsh is also home to a flock of the pink flamingos (and 3 Italian-accented ones, Isabel, Annabelle, and Mirabelle). It is also home to a hippo named Molly, a white stork (Seamus) and also a curious pelican (Pauline). A large green crocodile named Victor is considered to be the main bully in the marsh.

It is known as "The Waterlily Lake".

The Residents of Africa

The music composed for the Africa sections mostly uses everyday life of the music. During the scenes with the marsh and the waterfall, reflection music plays. Sometimes, the music changes with an exciting tune.

When Audrey shows up, lullaby music plays, which is based on how Audrey is caring for her baby ostrich chick in her first appearance. When Georgina is shown at some of the episodes, one can hear the instrumental version of her song.

The music is different when shown in the desert scenes. The music played is inspired by the Arabic music.

The Sun in Africa.

The Moon in Africa.

The Rain falling in Africa. 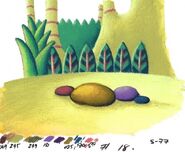 The Artwork of the jungle.

The Artwork of the dark jungle.
Community content is available under CC-BY-SA unless otherwise noted.
Advertisement