64 Zoo Lane Wiki
Register
Don't have an account?
Sign In
Advertisement
in: Characters, Animals, Residents of Africa,
and 17 more

Georgina the Giraffe is a giraffe who lives in Africa. She is the tallest of all the animals in Africa.

The name is similar to Gina from Outfit7

In almost of the episode, Georgina knocks on Lucy's window to come out to the zoo to meet the animals. She is the main animal friend of Lucy.

Georgina is a yellow giraffe with blue spots.

Georgina with her neck tangled. 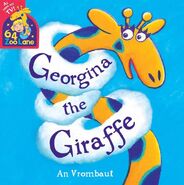 Book cover of Georgina the Giraffe