64 Zoo Lane Wiki
Register
Don't have an account?
Sign In
Advertisement
in: Characters, Animals, Residents of Africa,
and 19 more

Giggles and Tickles the Monkeys

Giggles and Tickles the Monkeys are the names of the 2 monkeys who like to play mischief. They are also identical-twins of the brother and the sister. Giggles has spiky hair while Tickles has horn-shaped hair.

Both monkeys are depicted with long tails, arms and legs and they resemble spider monkeys.

Both monkeys are known for causing mischief. As their names suggest, both of them like to giggle and tickle a lot. However, they can be sometimes helpful to the other animals and are not always mischievous. 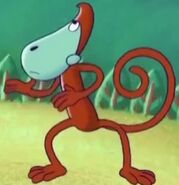