64 Zoo Lane Wiki
Register
Don't have an account?
Sign In
Advertisement
in: Characters, Animals, Residents of Africa,
and 7 more

Henrietta the Hairy Hippo is a relative of Molly, who has lots of hair on her back. The hippos in her home usually taunt her for being very hairy. Eventually, Henrietta dislikes being taunted about the hair on her back.

The hippos usually taunt her by seeing her completely hairy body. Henrietta soon was very miserable for being taunted. Soon, the other animals helped Henrietta on her adventures to find another place to live.

Dennis, Giggles and Tickles and The Snip Snip Bird are very helpful in helping her during her fears in the other locations. Dennis is eligible of bringing her across the desert. Giggles and Tickles are notable of rescuing her from a hungry spider. The Snip Snip Bird also helps her by cutting her hair and making her a princess. Also, the other hippos are impressed by her beautiful look.

Henrietta thinking about the hippos in the Zambam River.

Henrietta gets taunted by "Fuzzy".

Henrietta and the Snip Snip Bird.

Henrietta with a beautiful haircut. 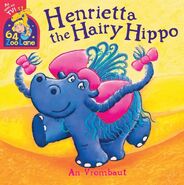