64 Zoo Lane Wiki
Register
Don't have an account?
Sign In
Advertisement
in: Characters, Animals, Residents of Australia,
and 8 more

Joey the Kangaroo is a young kangaroo and the son of his mother Janet and his father Elvis. He speaks with an Australian accent. He is also voiced by Keith Wickham.

Joey is a red kangaroo, much like his mother and father.

In his first appearance, Joey was unable to jump by himself. Ribbit was able to give him a pair of the boots, which helped him jump when he was small. Joey soon began to jump after trying out the boots. In later episodes, Joey is usually kind of curious, but usually a bit of naughty. His mother Janet is a bit protective of him.

Joey on Janet in the original opening song.

Joey jumps with his boots 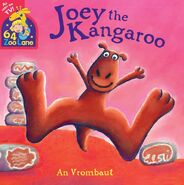 Book cover of Joey the Kangaroo.