64 Zoo Lane Wiki
Register
Don't have an account?
Sign In
Advertisement
in: Characters, Animals, Residents of Africa,
and 14 more

Kevin the Crocodile is a green miniature crocodile and a member of the trio. He is the best animal friends with Toby and Doris.

Kevin is a crocodile in light green color. He is small and has dark green spikes on his back, as well as jaws protruding out his mouth.

Kevin usually spends time with his best animal friends Toby and Doris. He is usually with the animal friend to them, but is a bit cheeky. He gets brainwashed under Victor's command in order to be a real crocodile. Kevin also dislikes Doris for being very bossy, especially with the other animals with bossy attitudes.

Kevin in the original opening song.

Victor teaching Kevin how to be mean and nasty like him.

Kevin with a nasty grin. 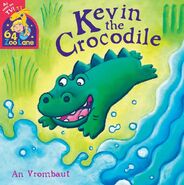 Book cover of Kevin the Crocodile.