64 Zoo Lane Wiki
Register
Don't have an account?
Sign In
Advertisement
in: Animals, Characters, Residents of Africa,
and 12 more

Molly the Hippo is a blue hippo who lives in Africa. She has a cousin named Henrietta the Hairy Hippo and a nephew named Eddie the Hippo. She is voiced by Anna Bentinck.

She is a blue hippo with 2 wrinkles on each her legs.

She is usually very kind and nice to the other animals. She is also kind in helping Lucy get ready for the next day before the story starts.

Molly in the original opening song.

Close up of happy Molly.

Molly with her eyelashes. 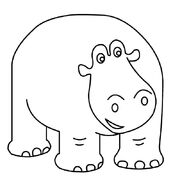