64 Zoo Lane Wiki
Register
Don't have an account?
Sign In
Advertisement
in: Characters, Animals, Residents of North America,
and 4 more

Mr. Bison and Mrs. Bison are two bison who are the parents of Barbara. They live in North America.

The two are based on American bison, hence their last name. Barbara's mum has narrow horns. Barbara's dad has wide horns.

Both of Barbara's parents give their daughter Barbara advise to always be with them to catch butterflies to avoid getting lost.

Barbara and her parents take the Christmas tree.

Barbara's parents in the herd. 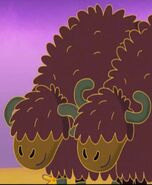 Closeup of Mr. and Mrs. Bison.

Barbara and her mum.

Barbara and her dad.