64 Zoo Lane Wiki
Register
Don't have an account?
Sign In
Advertisement
in: Characters, Animals, Residents of Africa,
and 16 more

Petula the Parrot is a female African parrot who is very protective of her fruit. She acts very hostile to thieves who steal her fruit. She is also voiced by Adrienne Posta.

She is a green parrot with hot pink wings, a magenta tail and with an orange beak and a pair of orange legs. She resembles one of the parrots from the Jungle.

Petunia is sometimes a villain, because she teaches Giggles and Tickles a lesson about eating the party fruit. However, she reforms when she and the other parrots have a party after Nelson toppled a tree to reunite Giggles and Tickles together, causing lots of the fruit to fall on the ground.

Petula fooling Giggles by pretending to be Tickles. 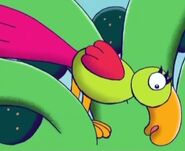