64 Zoo Lane Wiki
Register
Don't have an account?
Sign In
Advertisement
in: Characters, Animals, Residents of the North Pole,
and 13 more

Snowbert the Polar Bear is Boris's cousin who lives in The North Pole. He used to be lonely until he found friendship with Sidney. He speaks with an Deep American accent. He is also voiced by Bob Saker.

He is a polar bear who looks like his relative Boris. The difference is that he is colored white and has a purple nose.

Because he lives all alone, he used to play by himself until his animal friend Sidney arrived. He is also a animal friend of the other animals such as Thelma and has a good relationship. He usually dislikes Hercule Mustache's moaning and groaning.

Snowbert in the opening song.

Snowbert and Sidney can't find each other during the winter. 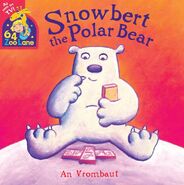