North America is a continent that consists of Canada, United States, Mexico and Greenland.

According to the artwork, The North America is based on Canada.

The alpine forest is home to many fir trees and the mountains. There lived a friendly Russian grizzly bear, a bit clumsy Brummie moose, a busy American beaver and a mushroom-farming Southern Drawl raccoon.

There is a river near the trees. The native species in the alpine forest are: the salmon, the robins, the river otters and the eagles.

Every winter, the forest is filled with the snow. Melanie is known to go snowboarding on the snowy hills as her favorite hobby.

The great plains is an environment that borders the alpine forest. Melanie finds a pair of the white-tailed deer dancing gracefully. Boris and his animal friends encounter a herd of bison that stampeded towards the alpine forest. It is based on the Great Plains.

The Residents of the North America

The music is a mix between ragtime and country music. 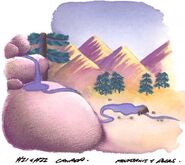 Artwork of the North American forest.
Community content is available under CC-BY-SA unless otherwise noted.
Advertisement