South America is one of the major continents in the real world and a minor setting in a few stories. Like Africa, it and The North America are fictionalized versions. There are mostly cacti in this setting. The South America is possibly based on Chile, Argentina and Peru.

The mountains are yellow in South America. It is home to a beige armadillo known for rolling down the mountains.

The valley is one of the main settings which be seen from the mountains. It is home to 4 unlucky animals: a Hispanic jaguar, a llama, a brown sloth with spiky hair and a Hispanic Toco toucan. It is also the setting where the animals play football.

The valley is also home to some of the other South American animals, such as hummingbirds, spoonbills, tapirs and green iguanas.

The cave is a minor location. Many animals (including ancestral natives) believe there are monsters making echoing noises in the cave.

According to Vrombaut, the story setting is described a dark forest. One can see numerous eyes (the monkeys, the ocelots, the macaws, the anteaters, the tapirs and the other forest animals) lurking in the many trees.

A mysterious mountain which is the home of ancient deities. It is the only known mountain that can speak.

The desert is an environment that had a forest of cacti. The desert mountains are based on the ones in Chile.

The Residents of the South America 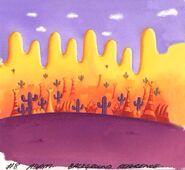 The Artwork of South America

The Artwork of the dark forest in South America.
Community content is available under CC-BY-SA unless otherwise noted.
Advertisement