The Story of Alfie and Charlie's Canoe

Alfie and Charlie must have a canoe in order to sail across the river. The two get into trouble without getting help from Randolph and Beverley.

Lucy has been on an amazing school trip. She doesn't know anything when on a school trip. She said that the bus driver has been lost during the trip. Lucy said she and the other students were stuck on traffic and had a competition with them by counting a number of coloured cars. The animals began singing a parody of the theme song after Lucy mentioned about 64 red cars that were counted.

It was a lovely morning in autumn at the North American forest. Alfie and Charlie were watching the river flow pass by. The two were not sure what to do across the river. Randolph began hearing the problems about crossing the river, which cannot be seen completely without a canoe. He meets up with Beverley who chopped down a tree. Randolph picked the smallest tree to build a canoe. Beverley began to prepare the canoe for Alfie and Charlie to explore the river.

Before setting sail, the two are given life jackets in order to avoid getting wet. Soon then, a small wave crashed into the canoe, which made Alfie and Charlie go into danger. As Randolph has the oars, Alfie and Charlie are nowhere to be found. He is worried that it is too dangerous to go canoeing without oars. Randolph started panicking and convincing Beverley that Alfie and Charlie are too small to be on their own.

Beverley began prompting him to use one of the chopped trees to go after Alfie and Charlie in danger. Randolph is in danger while trying to rescue Alfie and Charlie. Beverley was so worried with Randolph in danger, because he forget his paddles. One of the fallen logs is used in case of emergency.

Beverley made it out of the waterfall to avoid danger. Randolph, however, was still in danger. He was sitting on a log after a number of failed attempts. Beverley, Alfie, and Charlie don't know what to do with Randolph in danger. The three get help from some robins to build a hang glider.

Randolph was almost heading towards a bigger waterfall, so the three were able to rescue him from danger. After rescuing Randolph, the animals began to glide towards the sunset. The animals saw the North American sea while gliding towards sunset. Alfie and Charlie began suggesting to do the trip again sometime. However, Randolph and Beverley are very jealous with this suggestion, because this suggestion is very dangerous. 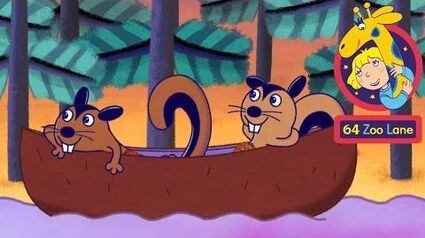