64 Zoo Lane Wiki
Register
Don't have an account?
Sign In
Advertisement
in: Episodes, Season 2 Episodes, Episodes that Georgina told the story,
and 7 more

The Story of Boris the Bear

Boris has amnesia and doesn't know where he left his comb. The other animals try to help him remember where he put it without causing havoc.

Lucy has bad memory after arriving in the zoo. Neither the animals, except Boris, had bad memory.

Most of the animals spent their time before winter arrives. Boris, however, cannot find his honeycomb before winter. The animals decide to help Boris to think where he left his comb. Boris chose to walk backwards in order to find it.

Boris remembers he was washing his paws on the river. He finds a nice piece of timber floating on the river. Boris ends up crashing into a beaver dam, which took hard work to build.

Meanwhile, the animals are following Boris who is walking backwards on the yellow grass. While pausing, the animals think all three heard a stomach growling. However, the animals see a herd of bison that is doing a stampede from a distance.

Boris took the wrong path which led to Randolph's farm of mushrooms. As the other three arrived, the herd of buffalo destroyed all the mushrooms.

Back then, Boris finds the honeycomb under a fallen log. The other 3 decide to have some honey.

We learn that we should always think and remember where we put our belongings without panicking. The monkeys have a good memory in tying their tails in a shape of a knot. Molly also remembered about Lucy going to bed. 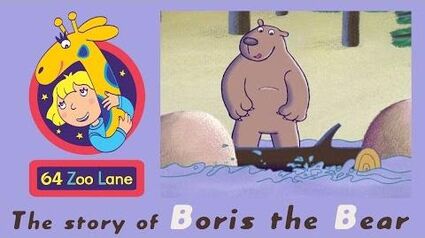