The Story of Casper the Chameleon

Casper has the ability to camouflage, but doesn't follow his grandfather's advice. What he did is use camouflaging of mischief, which led him into danger despite his warning.

Lucy hands out a drawing which has the pictures of her neighbors. After mentioning, we hear a voice coming out from a branch. The voice reveals to be Casper who does camouflage.

Casper lives in the jungle by catching dragonflies. His granddad teaches him how to use camouflage by changing colors. However, Casper gets warned for misusing the camouflaging skills.

As Herbert is trying to eat a watermelon, we see Casper who has camouflaged into a watermelon. He soon got tired and is very angry with the naughty mischief maker.

At the savannah, Audrey is nesting with her eggs. She decides to go to the water hole for a drink. The fake egg that was rolling down the hill reveals to be Casper. Audrey got very angry with him.

Back at the jungle, Doris is playing jump rope and Toby is watching him. He thinks he sees another turtle that is sitting on a log. The impostor reveals to be Casper who is trying to be a tortoise. The tree trunk begins to move after making another mischief.

Back at the jungle, Audrey and Herbert are having a conversation with Granddad about Casper being a naughty son. Doris arrived in the jungle. She reveals Toby and Casper are in danger and the 2 are about to fall off a waterfall. There, the 2 see Seamus flying in the sky. Casper had to flash red, as the stork could not hear anyone asking for help.

Seamus had to fly towards Toby and Casper in danger. Casper was almost punished for ignoring warnings from Granddad. Casper realizes his mistake about causing mischief across the environment. He ends up changing colors for fun.

Lucy asked Casper to change color for her. He agrees to change some colors. She also gives him a drawing for him to see. Casper can't see anything on the drawing, because Lucy thought it was him in the snow.

"No, It's not brilliant Casper! And I don't think you're funny at all!" ~ Herbert 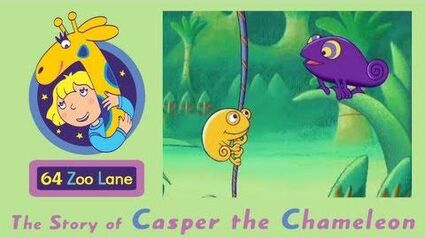