64 Zoo Lane Wiki
Register
Don't have an account?
Sign In
Advertisement
in: Episodes, Season 2 Episodes, Episodes that Giggles and Tickles told the story,
and 6 more

The Story of Cousin Chuckles

Cousin Chuckles arrives in the jungle, but is very different from Giggles and Tickles. Without any laughter, the jungle becomes very quiet and the animals are bored without any tricks.

Lucy is very tired after having a long day at school. She mentions about doing activities until getting bored.

Giggles and Tickles are having fun by playing tricks on the animals. Soon, the parrots are having an announcement that another monkey is arriving in the jungle. That monkey is very different than the other 2. He is very serious and he does not like jokes that much.

The next day, the animals got bored without any tricks, even Chuckles himself. He is suggested to visit Doctor Gordon. Doctor Gordon gives him a book about how to do real laugh. He started reading the book given by Doctor Gordon.

The animals are still bored and are waiting for a surprise. Chuckles started playing tricks to the other animals and everyone started laughing. The monkeys have made the greatest tricks in the jungle, having their cousin getting in to funny lessons.

Lucy wondered if there would be lessons about laughter at school tomorrow. Lucy also learned that laughter is also a good medicine to those feeling bored. 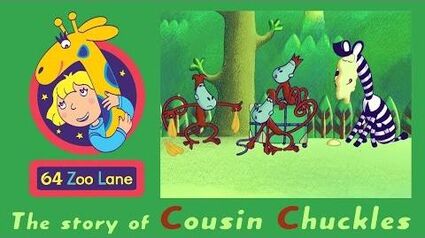