64 Zoo Lane Wiki
Register
Don't have an account?
Sign In
Advertisement
in: Episodes, Season 1 Episodes, Episodes that Georgina told the story,
and 7 more

The Story of Eddie's Big Adventure

Eddie gets warned numerous times about dangers in Africa for not listening to advise from the animals.

Somewhere during summertime in Africa, Molly was feeling worried about her nephew Eddie. She sends Audrey to go on a look-out for Eddie.

Eddie was frolicking around chasing a butterfly and crossing a collapsing bridge. Eddie is soon bullied by a snake for sliding over him. Eddie was warned not to slide on snakes, but soon is in the boulder territory.

As soon as Ronald crashed into the boulders, Eddie was warned that it is too dangerous to stay on boulders.

Something was heard rustling in the treetop. Soon as Nelson shook the tree, Eddie was hiding in it. He is warned not to climb on trees. Eddie has wandered off after being warned about climbing on the trees.

Soon, Eddie was floating away on a lily pad on the river. As soon as Victor looks at Eddie, his action was near Eddie, and as soon as he swam quickly, which rescued him from the waterfall. Soon, Eddie was almost put into timeout about too many dangerous things, which he isn't supposed to be. Eddie has spoken his first words, which made Molly very happy. He is given a playground at the jungle that was built by Nelson. Somewhere so Eddie can climb and slide and even swing safe and sound beneath his Aunt Molly's watchful eye.

Lucy has a set of swings in the school. The swings are very dangerous. 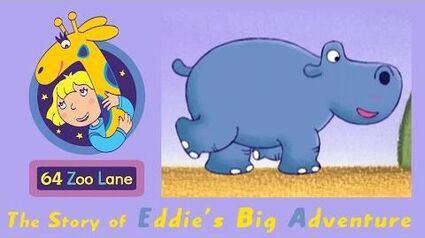