The Story of Georgina's Bumbleberry Soup

Georgina hires the animals to make a very special soup by using her favorite berries. However, the soup begins to explode when the other ingredients to the soup are added to the cauldron.

Lucy finds Nelson eating blackberries from the bush. Everyone talks about their favorite berries.

A national day about Georgina's favorite berry occurs today. She hires Toby, Doris and Kevin to make soup with her.

Georgina teaches everyone how to make a very edible type of the soup by using berries. They find enough berries from the tree to make the soup. Georgina is going to look for the whisk, which is used to cook the soup and Doris is hired to stir the soup. Doris doesn't like the taste of the soup and Georgina finally found the whisk at the desert.

Doris begins to hire more animals to deliver additional ingredients. As soon as more ingredients are added to the soup, the pot begins to explode. As Georgina returns to the jungle, the soup is completely ruined. It is revealed that the soup is only made from berries and nothing else. Everyone cheers her up by making some potato chips.

Lucy liked this story, because of the edible berries and the animals are funny. She began looking at Nelson who ate the blackberries, but Lucy kept a secret about Nelson in his habit of eating berries. 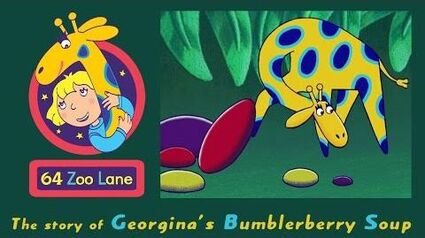