The Story of Georgina, Queen of Fashion

When Georgina finds a lovely hat, the animals decide to see who has the greatest fashion in Africa. However, things get ridiculous when the fashion event is overlapped by many guests.

Lucy is very sad about the boring, blue pajamas. She says her friends Yasmin and Robyn have different pajamas. However, the animals (including William) say the pajamas are fashionable in blue colour.

Georgina is very excited about being the greatest fashion model of Africa. She finds Herbert who is eating a worm. She uses some leaves as fashion style, which embarrassed him.

That night, the animals are ready to see the greatest fashion style. The first animal who walked on the event was Nelson with Toby and Doris on top of his head. The second is Zed with a bandana made of bananas. The third was Nathalie with a sombrero of flowers. The fourth was Molly in a colourful crown (made from plains grass). Even though the hats were ridiculous and silly, the animals are not complaining about them.

Georgina is attempting to reach the cherries, but had to put her hat on the ground. Back again, the fifth animal was Audrey in a hat made of feathers. The animals are complaining, due to the ridiculous hat size wasting space for them. The animals begin to collapse, due to tight space.

Georgina reached the cherries, but Herbert ate up her lovely hat. Georgina gets very angry at Herbert who ate the hat. Georgina is given two cherries for fashion in order to feel very happy. The animals are very impressed by the cherries (used as earrings) as this year's fashion style. The animals later sing a song about being yourself in getting your own hat or earring.

Lucy began understanding why fashion is changing so quickly. William began speaking to Georgina towards her ear. He said that her pajamas are beautiful in colour for tomorrow. 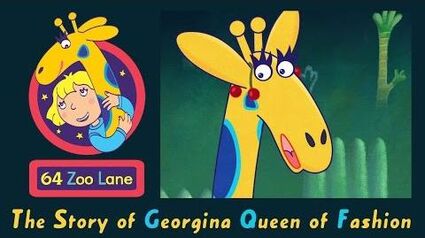