The Story of Georgina the Giraffe

Georgina shows her talent to all the animals about her neck. By doing so, she gets tangled up and is taken to Uncle Gordon.

Georgina gives Lucy a special slide after a quick hello. Later, Lucy tries to raise her neck high, but is warned that she will hurt her neck.

Georgina shows her neck to all the animals, which made her become a great performer. A poster was placed on one of the trees in the jungle, causing advertisement for the animals to watch. It is said that Georgina is doing a show near the blue mountain at the savannah. Georgina began singing a song about her long neck. She ends up misusing her neck during the grand finale, which gets tangled up.

As the animals laugh at her, Georgina began to feel bad. She is taken to Doctor Gordon's cave. While waiting in line, the 2 elephants have their trunks tangled. These elephant sisters were only trying to catch a fly, but both of them have been tangled into a knot together. The elephants sneezed and freed themselves, thus both of them leave and don't need to visit Doctor Gordon. The animals have to wait in line in order to meet Doctor Gordon; Georgina and her monkey friends are finally taken to the doctor. The monkeys meet Uncle Gordon in the cave, reading his book of knots. He tells her to say "Al" (backwards of the word "La") in order to fix it.

This suggestion worked, which made Georgina feel better. That evening, Georgina is brought back to the savannah for a great surprise. The animals put on a great show to impress Georgina; after performing, the animals were very kind to Georgina.

Lucy has fallen asleep when listening to the story. Boris began bringing her to Georgina to go back to bed. 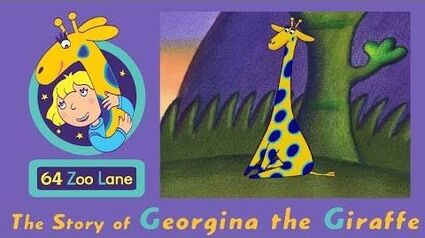