64 Zoo Lane Wiki
Register
Don't have an account?
Sign In
Advertisement
in: Episodes, Season 1 Episodes, Episodes that Nelson told the story,
and 6 more

The Story of Herbert's Birthday Party

Herbert crashes his own birthday party after getting a makeover at the Blue Mountain. The animals do not recognize him until he finds out what he's missing.

Today is Lucy's birthday and she is 7-years old. The animals did a celebration for Lucy after mentioning her birthday. Lucy is given a special story, because it's her birthday.

Herbert is very happy with himself, because it's his birthday today. He brought in some flies to join in the party. All the animals began ignoring Herbert when planning for his birthday party, due to three smelly flies. He asked the flies to go away. He plans to get a makeover far away from the African savannah.

He began asking Nelson to spray water to remove his disguise. The animals say that Herbert is missing something. He began calling the flies and the animals are very happy with him back. The animals are now playing in the mud, like a warthog does.

Lucy loves this special story, because it's her birthday today. 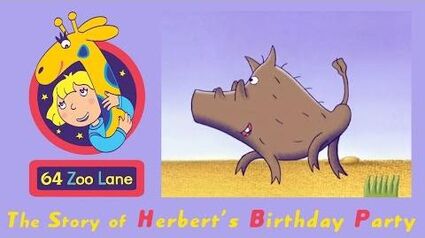