The Story of Herbert's Peaceful Day

When Herbert disturbs the animals with his noisy antics, the animals set a challenge for a big reward. In order to get this reward, Herbert must remain quiet for one day.

Lucy's animal friends are talking at once. Lucy asked the animals to keep quiet.

It was a peaceful afternoon in Africa. Everything was peaceful until Herbert began playing with his rocks. The noise began disturbing Reginald taking his afternoon nap. Reginald gets angered with Herbert making noises in the afternoon. Herbert is angry with himself, muttering rudely. Nelson is also angered when Herbert talked to himself. Herbert soon gets angrier than ever.

Herbert started eating a pile of fruits and vegetables in a noisy mood. He also started burping, which annoyed Doris. The animals have a talk to see what is wrong with Herbert. They give out a challenge for Herbert to get a big reward for staying quiet for one day. To see the big watermelon, Herbert must remain quiet for one day to complete the challenge; if Herbert fails the challenge, which must take his rocks

The next day was the time the challenge has began. In this challenge, Herbert must remain quiet from sunrise to sunset. Herbert tried to eat breakfast, but realized the objective is to stay quiet from day to dusk. The animals are on a lookout to see whether Herbert is quiet or noisy.

Herbert found Zed with Isabel, Annabelle, and Maribelle. Herbert tried to play music, but realized that this action is very noisy. Herbert also met up with Doris challenging her to play a game without making a sound. Doris told Herbert to find a bird or an ant during this game. She began to win as Herbert cannot say a word. Herbert also stayed near a tree. However, the monkeys tried to make him laugh. Herbert didn't make any laughter.

Upon sunset, the animals rewarded him with a giant watermelon. Herbert is forced not to make noise for 10 seconds. Behind him was a fly that came out of the watermelon, while the countdown has started. As the timer ends, the challenge is complete. The animals make him accept the reward. Herbert starts to eat up the giant watermelon.

Lucy liked this story, but the animals began saying "Yes" without saying a word. As Lucy is ready for bed, Boris said "Good night". Boris didn't notice he and the other animals must be quiet. Lucy likes to have peaceful dreams after the story ended. 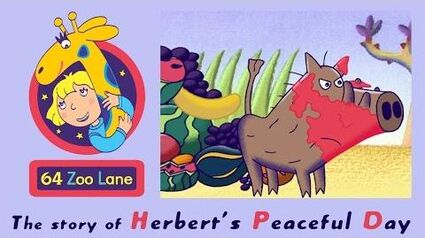