The Story of Herbert's Watermelons

When Herbert loses one of his rocks, Nelson and Nigel have to keep an eye on the watermelons. Things became a problem when Nigel didn't follow directions.

Lucy has flowers for Molly. However, a petal has fallen off one of them. The monkeys began taunting her about one of the flowers losing its petals. Lucy doesn't understand why the flowers are losing their petals. Nelson explained that all flowers and plants need water to live. Boris holds up a jar of water to keep the flowers of Lucy alive.

One morning, Nelson took his nephew Nigel for a walk across the river. They see Toby, Kevin, and Doris on the other side of the river. Nelson began taking Nigel to meet his friend Herbert. They see Herbert watering his garden of watermelons. Today is the day of ripening, which is the big event for gardens this year. The watermelons are not ripe yet. Herbert has to keep the watermelons ripe.

Herbert has a basket of peaches for Nelson and Nigel to enjoy while he goes to search for the replacement. Herbert began teaching Nigel the important lessons about caring a watermelon. It is explained that a watermelon is ruined when changed with yellow colour. The elephants do their best to keep an eye on the watermelons.

Nigel began eating some of the peaches for snack. Nelson began saying that the watermelons need water in order to be ripe. Nelson and Nigel saw Toby, Kevin, and Doris playing a game. Instead of playing Snakes and Ladders, the two decide to keep the watermelons ripe instead.

Nigel ends up rushing the ripening with very little water. Meanwhile, Herbert finally found the replacement under the mines. Nigel, Kevin, Doris, and Toby began playing in the river. Nelson walked up to Nigel saying if he has followed everything what Herbert said. Herbert is having problems finding a purple rock. He decides to go back to his garden of watermelons.

Nigel didn't know that the watermelons have wilted and turned yellow. He ends up whining and crying in frustration. That is the case when he started rushing on watering the watermelons. Toby, Kevin, and Doris began taking Nigel to Uncle Nelson. Nelson is very disappointed with Nigel, because he didn't follow all the instructions what Herbert said. Georgina made a suggestion that Nigel can have one of her watermelons.

The problem is Georgina's watermelons are not big as Herbert's. It is said that the watermelons need more water in order to grow. Nigel put smaller amounts of water on the ripe watermelons. The fruits began to be more edible by following her instructions. Nelson and Nigel pushed the watermelons to Herbert's garden. Herbert is very pleased with all the watermelons that came from Georgina.

Nigel began asking Herbert about the other watermelons on his garden. He was shocked that the watermelons have turned yellow. Herbert cannot eat the watermelons, because these can break his teeth. Instead, he will start using those watermelons as drums. That night, the animals had a slice of watermelon while Herbert began playing his new set of drums as a celebration.

Lucy is very happy with the story. The flowers have grown in the jar of water. The animals are right, because every flower and plant needs water in order to grow. 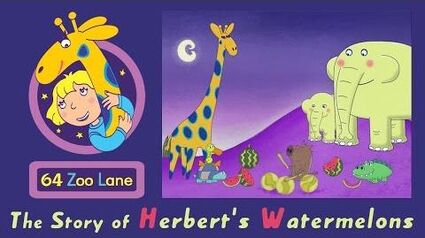