64 Zoo Lane Wiki
Register
Don't have an account?
Sign In
Advertisement
in: Episodes, Season 2 Episodes, Episodes that Victor told the story,
and 6 more

The Story of Herbert and the Watermelon of Doom

Herbert tries to keep a secret from Victor after getting a seed from him. The seed grows into a watermelon which can be seen from miles away and cause problems for the animals.

Lucy thought everyone is in line. Boris fools her and gives a good surprise for her, but Victor interrupts. He told everyone to keep a secret.

The animals are having fun in the water hole until Victor shows up. The animals backlash on him for splashing water with his tail. Victor is punished by the animals for doing mean and nasty things at the water hole. Victor gets Herbert's attention about the watermelon used as a ball. He tells him about a strange watermelon ever seen after the rainy season.

Victor holds up a seed on his claw. He offers Herbert to be his friend in order to get it. He ends up bargaining with Herbert about the seed when planted will cause a humongous watermelon, which will taste juicier and grow faster at the top of the hills.

Soon as Herbert planted the seed on the soil, the watermelon grew quicker on the top. Back at the savannah, Herbert is trying to keep a secret from the animals about the watermelon. The watermelon is growing bigger this morning.

Herbert asked Victor about the giant watermelon at the top of the hill. It is revealed that Victor actually tricked him in making a deal, which is a very notorious deed. Herbert is trying to prevent the big fruit from causing havoc by placing barriers. With the barriers placed, Herbert decided to eat the watermelon. The watermelon keeps growing and Herbert can't finish off the whole fruit.

The next day, the watermelon is bigger than ever it can be seen from miles. The animals could see the watermelon from every point of distance. The animals were very concerned about the watermelon growing countless times every second. They approached Herbert to see it was he who is causing trouble. Herbert asked the animals that Victor told him to keep a secret. It is revealed that this action is very mean and nasty, as explained by Zed.

Victor decided to watch his creation from a distance. Soon, Nelson creates a plan to stop the watermelon. It all started when Herbert and Ronald made a trail for the big melon. Nelson created a ramp made out of rocks. Nathalie is hired to chew the stalk, causing the watermelon to crash into a wall where Victor is standing. Soon, he is soaked by watermelon juice. The animals started drinking some of the juice, which tickled him as a lesson.

Eddie tries to go past the watermelon, but is unable to, due to the fruit blocking his path. He ends up in tears and walks away. But the butterfly managed to pass the watermelon because it can fly.

Victor is annoyed by the laughing animals. He refuses to be tickled with many dislikes of happy endings. Victor began asking Lucy to go to bed and not to tell him to say any positive information. Lucy tells Victor not to worry and that she knows he likes to be mean and nasty. Everyone then says “Good night" to Lucy, including Victor who looks back and smiles at her saying “Sweet Dreams”. 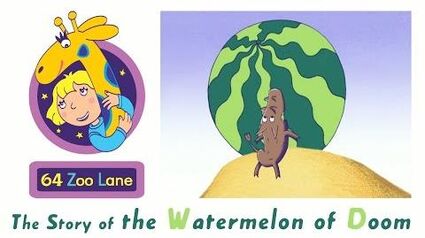