64 Zoo Lane Wiki
Register
Don't have an account?
Sign In
Advertisement
in: Episodes, Season 1 Episodes, Episode that Herbert told the story,
and 6 more

The Story of Herbert the Warthog

Herbert, Alan and Zed are bored in Africa doing nothing but enjoying their everyday hobbies. Herbert decided to make music with the other animals, but their noise disturbs Reginald trying to get his nap.

Before music was invented in Africa, the savanna was a boring place. Nothing much happened when the savanna is quiet. Zed keeps on running back and forth too many times. An aardvark is later attracted to the ants. Reginald began sleeping in the tall grass. Herbert is also bored as Africa has no music yet.

Herbert began hitting a rock, which made a weird sound. Herbert is occupied with the beat coming from the rocks. Zed is later attracted to the sound done by Herbert. Zed likes the music that came from the rocks. Zed asked Herbert to join in with the music. Herbert agrees with him that Zed is able to join in. Zed tried to find an instrument, but he put his hoof on a leaf, which made a weird sound. Zed also found gourds that make the sound of maracas.

Meanwhile, Alan continued to follow the ants until being asked by Zed to forget them. Alan is suggested to join in with Herbert and Zed. Alan always made music by using his snout as a trumpet. The music has a great tune with Herbert, Alan, and Zed together. The band returns to Reginald to join in with the music. Reginald refuses to join the band, due to his afternoon nap. Alan began suggesting Reginald to like the music for fun. Reginald began rejecting this thought, because "he and the other lions don't like having fun". The band is forced to play music somewhere else.

The band moved to the water hole, which is far away from Reginald. As the band begins to play music, some frogs joined in with the tune. The frogs joined the band as vocalists. Reginald is bothered by the band, along with the frogs. Reginald yelled at the noisy animals to stop the music. The animals must move further away from his resting place in order to play music.

Reginald is finally fed up with all the noise. He later approaches the volcano to stop the music. Reginald tried to stop the music by roaring, but the other animals found this noise interesting. The animals think Reginald should be a great addition to the band. Later, a flock of flamingos began prompting him to join in the concert. After too much prompting, Reginald finally joined in the concert. With Reginald in the concert, the animals continue enjoying the music. As the concert continues playing in the volcano, everything is different at night. The savanna is never quiet since the music was invented in Africa.

Lucy and the animals are having fun with music. Lucy wants another song, but it is time for her to go to bed. The animals began to sing some sort of a lullaby to bring her to bed.

On trumpet, we've got Alan the Aardvark...

...and let's hear it for Herbert the Musical Warthog on drums! That's me. 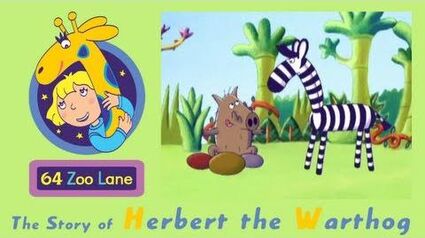