64 Zoo Lane Wiki
Register
Don't have an account?
Sign In
Advertisement
in: Episodes, Season 2 Episodes, Episode that Snowbert told the story,
and 6 more

The Story of Hercule Mustache

Lucy sees a white bear that looks like Boris. She thinks the fake Boris has a different voice. The real Boris has appeared next to his relative near a tree. Lucy was confused with the 2 bears playing a trick on her. The fake Boris is actually Snowbert.

One day, Sidney was juggling fish in a happy mood. He took a look at the icebergs from a distance. He sees a very large walrus sitting on one of them. His name is Hercule Mustache who came from an island far away. He is very curious about the North Pole and never saw this place before. He begins guiding him across the icebergs and sculptures done by Snowbert. Sidney and Snowbert brought Mister Mustache on a trip across the North Pole.

The 3 began going across the snowy fields through an icy lake. Mister Mustache began complaining about the frost wind at first. The 3 thought there was a fountain in the water. The fountain on the water is actually a whale. The 3 began boarding on Thelma to go across the lake. Suddenly, the ice grew thicker. This made Thelma come to a complete stop.

Hercule Mustache began to feel tired while going up the hill. This made Sidney and his animal friend upset with his moaning and complaints. The animals found a sled at the top of the mountain. As the sun is going down, the animals ride on the sled for fun.

Mister Mustache began complaining about the ride again. Sidney and his animal friend were very angry for his behavior being grumpy and naughty in the character. That night, the journey has ended with the animals. The animals began to sit in the farthest part of the North Pole and have a picnic for the best viewing spot. Up in the sky, the animals see the northern lights as a surprise. The animals are very happy with the aurora lights shining in the sky as a perfect viewing on a journey.

We learned that Hercule enjoyed the northern lights on a vacation without complaining. He promised to tell all the walruses about this experience.

Lucy feels the same way like the protagonist. She does not have a mustache like his does. The bears began asking Lucy to go back to bed. 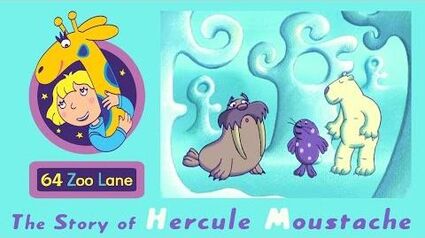