The Story of Horace the Hare

Bao Bao can't hug Horace, because he keeps hopping away. Bao Bao feels very sad when Horace has hopped away.

Lucy has noticed someone dancing with the animals. Nelson began saying that the animals are exercising near their guest. Molly said that this is their friend Cassandra. Georgina began saying that not everyone says "Hello" in the same way. Everyone hugs sometimes in traditional greetings.

In the mountains of Asia, a panda sets off on his morning walk. He was very friendly and greeted everyone in hugging. He has hugged Gertie and Cassandra and everyone liked him. There is one animal that Bao Bao can't hug. His name was Horace, a hare who is very busy.

He keeps hopping away, because he's very busy at collecting flowers. Bao Bao tries to hug him, but Horace refuses to be hugged. This makes Bao Bao very sad, because he is a friendly panda. Horace is not only busy, but also is very nervous. Bao Bao decided to keep an eye out for Horace. Bao Bao is still unable to give him a hug. Bao Bao got lucky in finding him. However, he is still unable to give him a hug. Horace still refuses to be hugged.

Horace had a lot of things to learn about hugging. He later visits the wise old carp who lives in the pond. Soon as he hits the gong, an Asian carp is constantly asking him for wisdom. Horace talks to him about the problem of hugging. He convinces Horace to hug with the panda in order to make him feel happy.

Horace returns to the sad panda. He asks him to give him a hug after an advice from the carp. Horace began to give Bao Bao a hug, which made him feel happy. He later gives all three a big hug.

Lucy likes the story told by Cassandra. She begins to hug Nelson very happily, along with Cassandra. 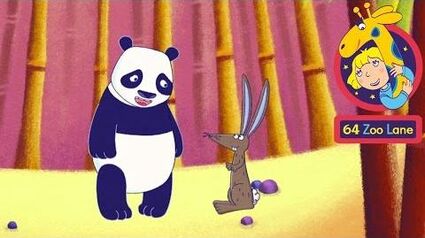