The Story of Isabel the Flamingo

Isabel ends up teaching everyone to hold a tulip in their mouth without realising anyone can learn a lot from him or her. Zed admits he and the others are having a party, except for Pauline who is wanting to get a makeover.

Lucy believes her cake is ruined after dropping it on the grounds. The animals still think that discovering of the deployed box didn't really ruin the cake. Lucy is told she could learn a lot from everyone.

The animals watch Isabel who tries to teach her students copy her. Later on, the lesson is interrupted by Pauline, who is gargling water in her mouth. Isabel doesn't realise that everyone copying her is very rude. The animals began to hold a tulip in their mouths, copying Isabel. Zed admits that he and the other animals are having a party. Pauline is very curious that this party requires a makeover.

Pauline walks up to Nelson watering his flowers. She decides to bring water, but doesn't know the pink colour is washing off when watering Nelson's flowers. Pauline also began helping Audrey build a bigger nest while trying to go to the party.

The 3 flamingos are very angry with Pauline. That is the case when half of the makeover is washed off and added with her muck. They ended up ridiculing Pauline who is clumsy and dirty. This treatment has put Pauline into misery.

Pauline has arrived with the other animals. Zed stopped the hypocritical way by saying "we could learn a lot from everyone". The flamingos begin to hear the words as a misunderstanding. The 3 are very sorry for mistreating Pauline. All the animals began singing a song about learning a lot from everyone.

Lucy can learn a lot from the animals, just like with Isabel, Maribelle, Annabelle and Pauline. Lucy has learned a lot from Georgina. The cake is still delicious, even when it's still in the container and it fell on the ground. 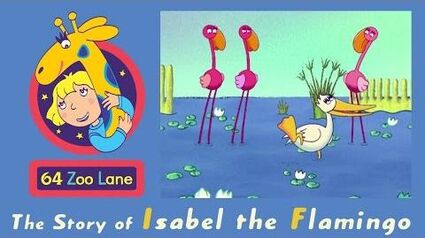