64 Zoo Lane Wiki
Register
Don't have an account?
Sign In
Advertisement
in: Episodes, Season 3 Episodes, Episodes that the Puffins of Mossy Bay told the story

The Story of Jamie the Littlest Puffin

Lucy is surprised by the puffins of Mossy Bay. The three represent their names as "Thomas", "Sharon", and "Lewis". Another one named "Jamie" has arrived. The three ask her questions about Lucy in her personal life. The littlest of them all asks Lucy about having an occupation on sucking her thumb. Lucy used to do that only when tired.

One morning, Mister Mustache is relaxing lying down on a water rock. The puffins came down during quiet time. The four began to jump over the waves, except for Jamie sucking his feather. He is given a rubber band to prevent him from sucking his feather.

The four decided to play leapfrog after a failure attempt at jumping. The rubber band came off of Jamie, which also started sucking his feather. The other three were irritated by the habit.

Jamie is given a starfish to avoid being in the habit. Later on, it was lunchtime for the four. The starfish was pushed back to the ocean. After lunch, the four decided to play football. Jamie went into the habit in sucking his feather, which made the other three irritated. Jamie can't play football and is forced to watch the other three play.

While arriving, three hostile crabs began blocking the path to the top. Jamie grabbed a piece of seaweed to move them to another place. The two finally made it to the top of the island. The two can see Thelma and Gunnar from a distance.

Thomas, Sharon, and Lewis began to see Jamie at the top of the island. Jamie finally got out of the habit of sucking his feather; this made him explain to Hercule Mustache who was biting his nails awhile ago. 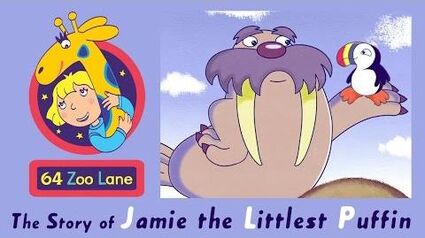