The Story of Jazz the Carnival King

Lucy has a pair of pink shoes for tap-dancing. She says one of them must be very careful when using these shoes. She gave Adam the shoes, but Adam isn't a very good dancer.

One morning, the animals are practising for the day of carnival in South America. Leopoldo is dancing in lambada. Tallulah is dancing in tango. Adam is doing his famous roll. He bumps into Jazz while rolling into him. He asks him to start rolling like an armadillo. Jazz doesn't do any of the dance styles. He only does the jive.

The animals ask him to show them the dance. However, he refuses to. The animals love to see him dance. Tallulah began getting the crown to make him the king of carnival. She gave it to Adam for him to bring to to Jazz. He elected Jazz to do the dance in order to be king of the carnival. Jazz still refuses to dance.

Adam began convincing him to dance for the carnival. Jazz can't dance without the shoes. Adam began convincing that these shoes are very rare to find. Adam gave him the shoes in which Jazz was wanting. He likes the shoes, but his red jacket was completely eaten by ants. Jazz soon got angry at Adam for no dance.

Leopoldo began bringing in some partners in order for Jazz to dance. The flies began to annoy him. However, Jazz was almost dancing with the insects in his way. He gets distracted by Tallulah for a special cake. He ends up walking on the stones, which is actually a dance move.

Jazz almost tried to eat the cake. He was distracted by Adam who is dancing. He gets humiliated by Adam. Adam began bringing the animals in order to make him king of carnival. He ends up convincing Jazz that he and the other animals have taught him how to dance.

That night, the animals began asking Jazz to do all the dance moves from earlier. Jazz had finally been dancing, but almost spoiled the event by mentioning salsa special. It was the day Jazz became the carnival king.

Lucy and the animals are dancing after the story has ended. Lucy stopped dancing when Georgina began taking her to bed. 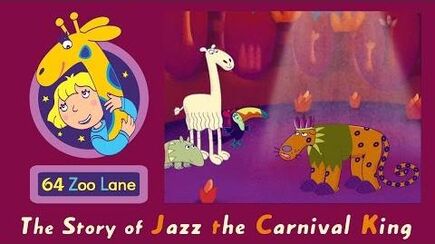