The Story of Joey's Sleepover

Tomorrow night, Lucy is going for a sleepover at Cousin Max's house. Lucy is not sure about sleeping in the house. The animals say things may be different in Max's house. Ribbit has appeared, saying sleepovers can be fun

Every evening, Joey goes to sleep in his mum's pouch. He loved to sleep in, because the pouch is so warm and cozy. The next morning, the parrots woke up Joey. Joey began telling them it is morning already. It is Janet's birthday today. She is given a birthday present, but the ants have taken it away. Janet is also given two tickets as a next gift. These tickets are for the Wally's concert tonight. She thought the music would be too loud for Joey.

Joey goes up with Phoebe and the two did face painting as a gift for her birthday. Joey began saying Janet can't go to the concert. He agrees with Phoebe about going for a sleepover tonight. The mothers agreed to do so. That evening, Joey is dropped off to Phoebe and her mum.

Far away from the home, the other animals are watching Wally during a concert. Joey, Phoebe, and her mum began to sleep. Joey is very lonely for a few minutes. He sees the stars that form into three shapes. As the concert has ended, Janet and Elvis begin to find Joey sleeping independently.

The next morning, Joey began sharing his stories to Janet. She could invite Phoebe next time for a sleepover. They go to Janet in staying in her pouch. Joey and Phoebe had a bouncy ride across the Australian outback.

Lucy has a problem for going to a sleepover tomorrow. The problem is that Lucy will miss all the animals of the zoo if she does so. Georgina began suggesting her to tell Max a bedtime story. 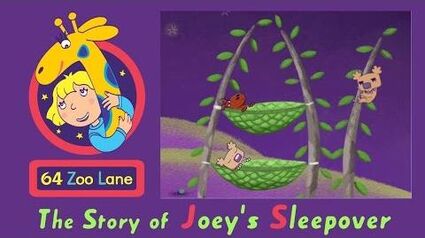