The Story of Joey the Kangaroo

Joey can't jump, so he gets help from Ribbit the Frog. He helps him jump with a pair of lost boots from a billabong.

Lucy has a bad feeling what she has done in school today. Ribbit cheers her up with a story about a kangaroo with the inability to jump.

One morning, Joey was raised by her mother Janet. She meets up with Julie and Janice about introducing their sons. The young kangaroos begin to practice for jumping as spring arrives. Joey, however, is still unable to jump.

This makes his mom and dad so disappointed that Joey is unable to jump. He ends up sulking near a lake, which makes with the 2 eyes appear. The eyes reveal to be a frog named Ribbit (who is the narrator). He gives Joey a pair of boots for him to jump, much like Ribbit in his childhood needed them. The boots worked, which made Joey jump.

The next day, the event begins with all the marsupials waiting for their young to jump. This event is held by a platypus who is the announcer of the event. All the young marsupials jump over the bar that is carried by parrots. Joey finally jumps over the highest bar with his boots. Mr. Platypus says that the boots can't be used. Joey finally jumps over the bar without his boots. The parent marsupials are pleased for his high jump.

Lucy is very happy with the story. She and Ribbit begin jumping over a snake (used as a jump rope). Lucy doesn't want to go to bed yet. She is grabbed by Georgina that it is bedtime. Ribbit and the other animals begin to say "Good night" to her.

"Oh, my! Oh, my! It's getting a bit wet down here. The rainy season must be earlier this year." 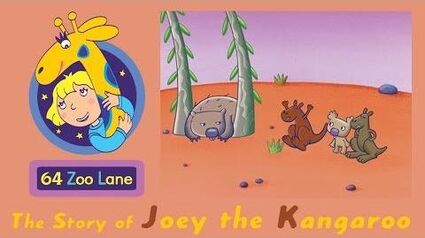