The Story of Kevin's Magic Trick

Kevin decides to do magic tricks as the animals have nothing to do under the hot weather.

Lucy holds some flowers and shows magic tricks to the animals.

The animals have nothing to do under the hot weather, except Kevin, who was making a banana disappear. He impressed it to Doris and Toby. This gives out a suggestion for Kevin to perform a magic show at the volcano.

Upon entering the volcano, the animals are gathered to watch the show. At first, Kevin is too nervous to perform the show. Later, he does magic tricks with his banana (used as a magic wand). He used it to make the cloud turn into a fish, a cake and even Nelson. As the cake is transformed into Nelson, this makes Herbert very upset. As rain falls on the volcano, the animals danced in the rain happily instead of being angry with Kevin. Herbert, however, is very angry with Kevin for making his cloud (in the shape of a cake) disappear. 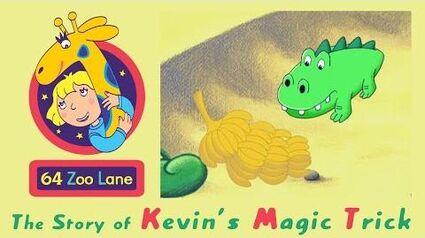