64 Zoo Lane Wiki
Register
Don't have an account?
Sign In
Advertisement
in: Episodes, Season 1 Episodes, Episodes that Victor told the story,
and 6 more

The Story of Kevin the Crocodile

Arriving in the zoo, an unwelcome visitor has emerged from the bushes. He is a crocodile whose name is "Victor". The animals are upset about the nasty crocodile.

Victor begins to threaten with the animals in the marsh. He is notorious for scaring butterflies, tadpoles, and many other species in the marsh. He later sees Kevin with his best animal friends Toby and Doris.

Kevin leaves his best animal friends while seeing Victor. He is taught to act like a true crocodile. First, Kevin is taught to use the eyes to scare any with the animals and then the grin. Kevin returns to Toby and Doris using his angry eyes at them. This attitude is only known to fool them.

He also tries to use the grin, but this plan never worked. The last lesson is to splash and scare all the animals. Kevin tries to scare Toby and Doris, but this attempt failed. He is smacked on the face by her cattail.

Victor is very angry after all the failures. He bites Toby with his jaws in anger. Doris and Toby are willing to escape from his jaws. Kevin is very angry at Victor for being a bully. He ends up biting Victor's tail, tagging him and causing him to bite his own tail. Victor gets an injured tail after that. He later retreats with an injured tail. Kevin is now safe from Victor with his best animal friends Toby and Doris.

Victor is not interested with happy endings. Lucy still likes happy endings. The animals laugh at Victor with his crooked tail. It is time for Lucy to go back to bed afterwards 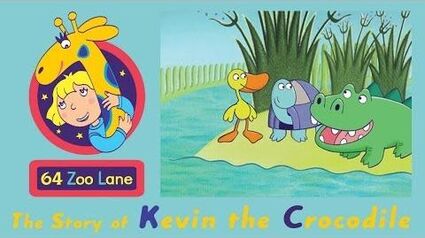