64 Zoo Lane Wiki
Register
Don't have an account?
Sign In
Advertisement
in: Episodes, Season 2 Episodes, Episodes that Boris told the story,
and 6 more

The Story of Melanie's Birthday Present

Lucy sees Nelson who has tripped over. The animals thought everyone put up a gym instead of storytelling.

It is snowing in the North American forest. Melanie has no presents for tomorrow, because it's her birthday. The animals try to cheer her up with a surprise present. She tries to spin like a chipmunk, but the attempt was futile. Randolph shows her the most edible mushroom in his farm as a suggestion.

Next, Beverly chops down a big tree to make the piece of wood a present for Melanie. Also, Boris gives out a jar of honey and syrup as a tasty mixture. Soon, Melanie was trying to swim like some salmon in the river, but nothing happened.

The next day, Melanie tries to fly like an eagle, but nothing has ever happened. The other animals give Melanie 3 presents. Melanie still doesn't like the gifts. The animals give out a special present for Melanie: a snowboard. Melanie enjoys her new birthday present.

Nelson is safe after tripping over. He is very jealous with the monkeys about sticking with gymnastics. Lucy should now stick to stories instead of gymnastics every night. 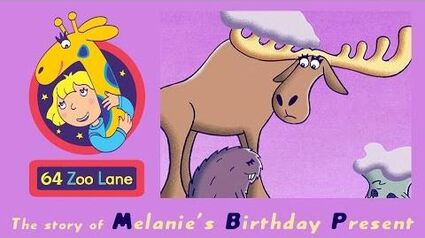