The Story of Melanie's Little Helpers

One winter, the North American forest is filled with snow. Melanie is very excited by snowboarding down the biggest hill in North America. However, Melanie is not good at turning her snowboard. She ends up hitting a fir tree with Alfie and Charlie on it. Melanie tried another hill; the path doesn't have any trees. Meanwhile, Boris and Beverley are building a snow sculpture in North America. Melanie ends up crashing into a rock, which made her change another direction. She ends up crashing into a nearly-made snow sculpture, which upsets Beverley.

Boris began suggesting Melanie to go practising on the slopes, like Randolph is doing. Melanie went on another hill and the path also has no trees. Melanie, however, took the wrong direction by reaching the trails made by Randolph. She also crashed into Randolph and the two began rolling in a snowball. Randolph is very upset with Melanie. Later on, the animals are having a meeting about Melanie.

During the meeting, we heard that Melanie was accused for causing damage to the animals. Boris had a solution to help Melanie with her problems. He asks Randolph to teach Melanie to go snowboarding properly. The animals agree to help Melanie with her problems. Melanie is too nervous about the lessons, whether one of them is challenging or one of the instructions are confusing. Randolph began asking her that Melanie should practise to be good in her lesson. She is taught how to change directions during the lesson. Melanie has to move her head while on the snowboard.

Melanie didn't pay attention to Randolph during training. The lesson had to be restarted. Melanie has successfully avoided a tree. However, she didn't listen to Randolph. Randolph is telling her to turn left in order to avoid hitting obstacles. Melanie got stuck on a river and the second attempt has been failed. Randolph told Melanie not to give up on her lessons. The lesson was restarted the third time. Melanie tried to do the lesson, but Charlie fell on her antlers.

It is revealed that Alfie and Charlie can be the helpers of Melanie. Alfie and Charlie have given Randolph an idea to help Melanie. Randolph asked the chipmunks to go move left and right. Melanie is turning her snowboard successfully until Melanie didn't need any help in turning her head. Melanie has finally become used to snowboarding without help from Randolph, Alfie, and Charlie. She has finally avoided the snow sculpture in which Boris and Beverley were building.

Lucy wished if she could ride her bike without the stabilizers. Practice makes perfect when Lucy gets helped by the animals. 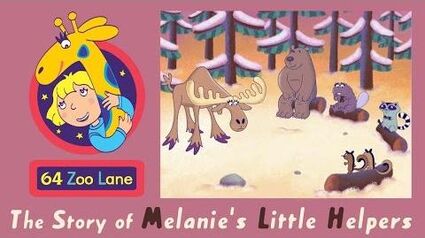