The Story of Melanie the Moose

Lucy explained to the animals that Trudy is no longer her friend, due to being clumsy and ruining her favourite pen. This reminds Boris of the time when he broke up a friendship with his animal friend Melanie.

Deep in the forests of the North America lies a moose walking in the region. Melanie, the moose, meets a beaver named Beverly who is building a dam. Beverly doesn't need any help; however, she accidentally drops a piece of timber on the river.

Upon meeting Randolph the Raccoon, Melanie isn't aware that she stepped on one of his mushrooms. She asks Boris if he needs any help to get the honey, but she accidentally hurts him. Melanie tried to dance with some deer, but she crashed into the beehive in which Boris was getting and the beehive was washed away, causing him to lose the honey; Melanie also ruined Randolph's mushroom garden and destroyed Beverly's dam.

Later on, Melanie was scolded harshly by all the 3 of her animal friends for her clumsy antics, leaving her insulted and causing her to walk away in despondency. As soon as Melanie stayed for long, it started to snow and Melanie found her friendship back covered under a small thicket of snow. Melanie's friends apologise to her for their harsh treatment.

This was the last time Boris had broken up a friendship with Melanie. Lucy has to show remorse to Trudy for breaking up her friendship tomorrow. 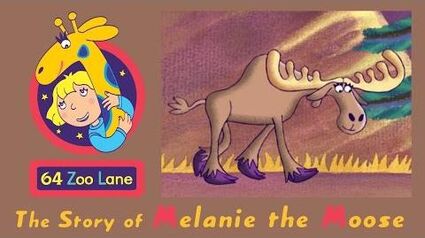