The Story of Nathalie's New Neighbors

Nathalie dislikes her neighbor Herbert, so the suggestions for finding a new neighbor is very hard.

The animals talk about meeting the neighbors. Georgina explained that an orangutan from the next door moved in the exhibit. The animals have a suggestion about moving in doing fun far away.

Nathalie lives in a shady tree, but the home next to hers is Herbert's house. Herbert ends up making noises, which results her to be driven mad. She meets Audrey, who is very good at helping Nathalie find a new neighbor. She tries to make Victor be her neighbor, but his attitude is very nasty. She also tries to stay near a tree, but the tree is struck by lightning. That night, Nathalie had to search for a very long time. She finds a mound filled with the watermelons.

The next day, she mentions about the new home which belongs to Herbert. A whole line of other animals is suggested to be her new neighbors. Nathalie must interview each animal to be their neighbor. She didn't like Pauline who got her feet dirty, nor Alan who is talking a lot, nor Nelson, nor Doris, nor Patsy, nor two snakes. After the other animals have left, there was only one left. Later, she finds Harry who is very good at helping her. He likes everything quiet. However, he brings out his family to her join in. That night, the hyenas are having fun laughing and playing during the dark. Nathalie does not like noises during the night.

Lucy has good neighbors: the animals at the zoo! The animals are also happy to have Lucy as their neighbor too. 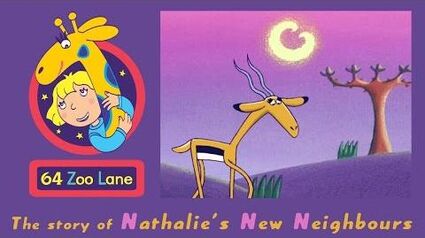