The Story of Nelson's Nephew Nigel

Lucy gives the animals a biscuit. She later throws the empty bag of biscuits on the ground. The animals do not like the habit of throwing the bag on the ground, which is considered littering and naughty behaviour.

The next day, the two went on sightseeing. The two have their first stop at the garden of Georgina. Nigel begins to use some of the watermelons and bananas without permission from Georgina. However, he soon realizes to always be with Nelson. The two began meeting Audrey building a new nest. While watching over three of her eggs, Nigel is acting suspicious by breaking some of the sticks. Nigel doesn't respond to Audrey after being warned.

Nigel also became very suspicious by turning the pool into mud while exploring on his own, which contains Doris, Toby, and Kevin bathing in. The animals have a council at the tree to know about havoc caused by Nigel. The rain arrives across Africa, and the animals are building up piles of fruits. Nigel refuses to listen to the other animals during the rain. Nigel soon caused a mess during the storm. He is too embarrassed to stay in the shady tree.

Nigel made the noble choice about apologizing for his unacceptable behaviour. The next day, the flowers begin to bloom after the storm. All the animals took a look at the flowers.

Lucy learns about science after listening to the story. She said that Nigel was planting the seeds which where thrown away, in which the rain began making them grow. However, the rubbish doesn't grow during rainy weather and instead makes a mess when thrown away. Lucy has an idea with the rubbish: she wants to clean up the whole zoo! It is too late to clean up. 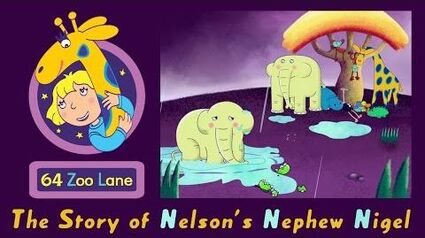