64 Zoo Lane Wiki
Register
Don't have an account?
Sign In
Advertisement
in: Episodes, Season 1 Episodes, Episodes that Georgina told the story,
and 6 more

The Story of Nelson the Elephant

Nelson refuses to give up his jumping habit, due to being bored. The animals try to teach Nelson a lesson for disturbing them.

Georgina starts knocking Lucy's window. She starts sliding down her neck and arrives at the zoo. Lucy doesn't see anyone at the zoo. She gets surprised by the other animals in the zoo. Lucy ends up convincing that the animals were hiding, but is soon warned. If Lucy does this, the noise can wake the neighbors. Georgina began to be sarcastic towards Nelson instead of thinking of others.

One morning, Nelson (as an elephant calf) woke up very early. He started to eat up all of the baobab leaves for breakfast. Nelson is bored after eating the leaves. He decides to jump all day. The noise bothered Nathalie, Audrey, and Reginald. The animals are very cross to see where the noise was coming from. Nelson is warned by the other animals that too much noise can give the animals a hard time. The animals had enough of his behavior, so the 3 animals thought of a plan. That night, Nelson was fast asleep. The animals built a trampoline to avoid noises in the morning.

Nelson woke up the next day. Nelson did not know the trampoline was a punishment for him. Nelson has to promise to stop jumping. Nelson does not like being bored. For a more quiet game, the animals constructed ladders and found snakes. They all played Snakes and Ladders (a traditional game) all day.

At the end of the story, we learn that we must think about the others before making noises. Even though Nelson was noisy, Lucy still loves him. It is bed time for Lucy. Georgina began taking her to bed, tucking her in a blanket with her teddy bear. 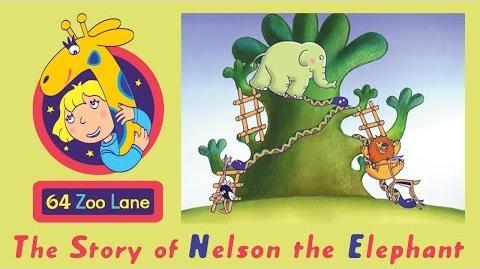