The Story of Patsy the Porcupine

Lucy is very excited about a fair in town. She is very interested about going on a carousel, a train ride, and eating a candy apple. According to her father, Lucy must clean up her room in order to go to the fair. Lucy is conflicted that cleaning up may take forever. Nelson began telling her a story.

It was a beautiful morning in Africa. Audrey spent time collecting grass for her new nest. She meets up with the monkeys eating bananas while going to the nest. Georgina meets up with them, eating the leaves from the tree. Nelson also likes to eat leaves, but in a different way. The animals did not know there was rubbish on the floor.

Patsy ended up calling for help, since she is injured. Audrey began hearing Patsy crying for help. She arrives towards Patsy crying for help. Audrey puts a bandage on her sprained foot, but took a look at her broken spikes. She goes out to get some glue to fix the broken spikes. Suddenly, the wind has occurred in Africa. The wind began blowing away many rubbish across Africa, causing the savanna to be even messier. Zed tripped over some banana peels, which angered him about the mess. He argued with the monkeys about the agreements and disagreements with bananas.

Meanwhile, Audrey found glue for Patsy. Lots of ants began arriving in the savanna to eat the rubbish. Meanwhile, Zed has had enough with the arguments between the agreements and disagreements with the monkeys. Lots of hungry ants began infesting the savanna without eating the leaves. Nelson woke up with ants over him. The animals are worried that there are too many ants in the savanna.

Patsy is waiting for Audrey to arrive. She and Nelson finally arrived with glue. She finally puts glue on the broken spikes. Patsy is still unable to move with her injured foot. She is taken by Nelson to see the animals cleaning up the mess. Patsy is very impressed that the animals have cleaned up the mess without her help.

The animals have thanked Patsy for being a good cleaner in Africa. The ants began to return to their anthills while carrying the rubbish. The animals followed the ants back to their homes and made a comfy chair for Patsy. Patsy began resting her injured foot on the comfy chair. The animals began to clean up the mess after Patsy is feeling better. 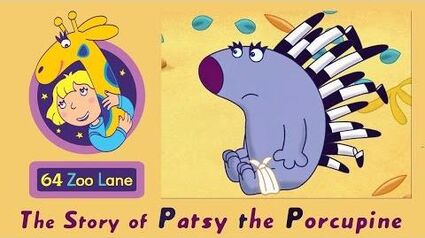