64 Zoo Lane Wiki
Register
Don't have an account?
Sign In
Advertisement
in: Episodes, Season 1 Episodes, Episodes that Molly told the story,
and 6 more

The Story of Pauline the Pelican

Pauline can't catch a fish like Seamus, so she decides to steal one left by him. Meanwhile, she is scolded for stealing all the animals' foods.

Lucy borrowed a bracelet which belonged to Emma and the animals realize that it isn't hers.

As the sun shines every day in the lake, lots of fish began jumping out of the water. Pauline is to catch a fish for her breakfast every day. This time, she is unable to catch one. She later sees Seamus flying in the sky looking for fish to capture. He caught lots of fish for breakfast.

She later sneaks up on Reginald who is sleeping with his bone. Then she steals his bone. This made Reginald feel very grumpy. Pauline tried to fly, but she didn't notice there was a lot of food in her mouth. Pauline had to walk towards her home.

That night, all the animals find out that Pauline was a culprit. She was told to keep a look out for thieves trying to steal food the next day. This made Pauline feel very guilty about herself, even though she was hungry this morning. She returned the food which belong to the 3 animals. Pauline didn't eat anything the whole day. She felt very happy about herself and fell fast asleep. The next day, Seamus, Herbert, and Reginald give her a big cake. The animals began sharing it as a surprise.

"We're not disturbing your tea or anything." ~ Seamus

"It seems someone stole my watermelon! I've buried it in the safest place in the whole savannah!" ~ Herbert 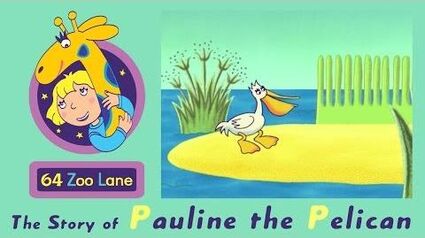