64 Zoo Lane Wiki
Register
Don't have an account?
Sign In
Advertisement
in: Episodes, Season 2 Episodes, Episodes that Giggles and Tickles told the story,
and 6 more

The Story of Petula the Parrot

Petula starts tricking Giggles and Tickles by copying their voices after stealing her fruit. The monkeys get help from Nelson to find each other.

Lucy is thought to have lost his voice. However, Petula tricked her by using her voice. Lucy never lost her voice and it was Petula who was imitating her.

It is now the moment when Petula played tricks on the monkeys after stealing her fruits. The monkeys are fooled by Petula near a burrow and a tree, while one of them gets cleaned by Kevin. The monkeys are having a hard time finding each other, thinking whether one of them is on the burrow or the tree.

Nelson is very eligible in helping the lost fruit. He tried searching for one of them in the burrow and the tree, but only found snakes, spiders, a gecko, and even Eddie. His aunt Molly found Eddie after Nelson accidentally found him in the tree. Nelson began shaking the tree, which is about to fall on the ground.

The monkeys are finally reunited with each other. Lots of fruits began falling down from the tree. Petula allowed the monkeys to join in the party. She began inviting the other parrots to a party. Everyone had a party when all the fruit fell on the ground.

Lucy didn't really lose her voice. She thought Georgina was saying to go to bed. It was Petula who is using her voice. 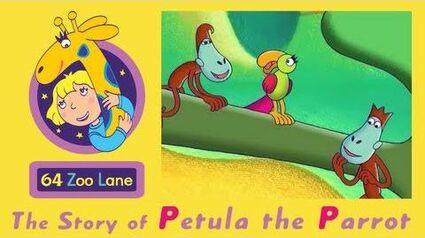