The Story of Phoebe the Koala

Phoebe is unable to win any activities all the summer. No matter how hard she tried, she could barely do any of the activities.

Lucy has blue paint on her nose, realizing she and her friends did painting at school today. The animals recognize the paint from the story of an Australian koala.

Phoebe ended up challenging her Australian animal friends on a gum tree race. The parrots do not realize that Joey and Jimmy cheated once Phoebe reached the top of the tree. Phoebe ends up getting very unhappy. She sees Wally who was painting a rock. She ends up being useless when Joey and Jimmy came up until Wally is persuading her to help.

While trying to design with leaves, ants begin to take the leaves, which ruins the artwork. Another thing is Wally is teaching her how to paint. Despite being called "useless", Wally takes a look at Phoebe making a creation by steps. We learn that Phoebe is doing something, turning her negative to positive feeling to make her friends Joey and Jimmy do a creative artwork.

One of the monkeys says that it wasn't Phoebe who put paint on Lucy's nose. Lucy did not go to Australia, though. She just had the paint from school. Lucy has to go back to bed after explaining. 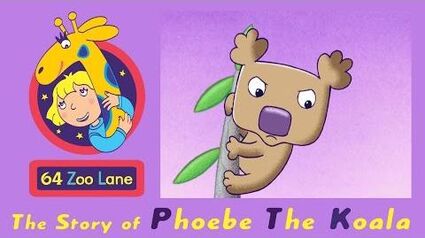