The Story of Reginald's Big Sleep

Reginald gets upset with too much noise while trying to get some sleep. He decides to keep his resting place secure so no one can make noise. Everything is different when Reginald is left behind for a long time.

Most of the animals are very tired and have fallen asleep. Georgina is the only animal who is able to tell a story.

Reginald likes to sleep in the tall grass. Everything is quiet until Nathalie started chewing the grass near his resting spot. He convinces her to eat grass somewhere else while trying to get some sleep. Reginald decided to get some rest. Later, he finds out Zed chewing near the grass. He convinces him to chew grass somewhere else. Reginald goes back to sleep in an upset mood.

Reginald hears the stomping noise caused by Ronald, who is trampling the grass near his resting spot. He convinces him to trample the grass somewhere else. Reginald goes back to sleep in order to avoid being grumpy. Lastly, Nelson is getting grass to build a new nest for Audrey. Nelson and Audrey are talking to each other about the grass. Reginald gets very angry with too much noise. He convinces everyone to interact with the grass somewhere else.

The animals moved far away to avoid making noises. Herbert is looking for truffles across Africa. Herbert is warned not to make noises near Reginald. Herbert did not listen to Nelson who warned him. Reginald is even angrier with Herbert making noise. Reginald began to use mud to secure his resting place. He draws a line near the grass, so no one can make noise. The brown line prevents animals from entering the tall grass.

Lucy would like to sleep with the animals in the zoo. However, Lucy must sleep in her own bed instead. 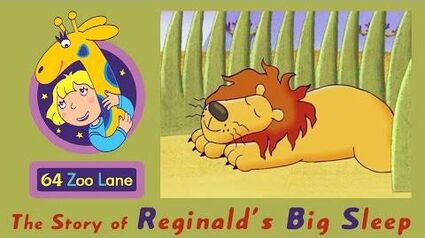