The Story of Ronald's Swimming Lesson

As the animals try to reach the end of the rainbow, Ronald can't swim very well. They try to bring Ronald across the river.

The animals saw a rainbow across the sky. It is explained that a type of fruit will only grow when a rainbow appears, as explained by Georgina. The animals went out for an expedition at the end of the rainbow. They marched towards a river leading a path to the elusive fruit.

The animals can't wait for the river to dry up. They decided to swim across instead. Ronald can't swim to the other side. This is because a rhino is too heavy to swim underwater. Ronald took a look at a pile of boulders in order to cross the river.

A bridge was built in order to cross the river by using boulders. This plan didn't work. All the boulders were cracked into pieces. Herbert decided to dig a tunnel under the river for Ronald to reach to the other side. Herbert can't dig to the other side, because the water will go below the ground, which made him take a wrong direction.

The animals had a picnic near the river. While asking for Ronald, we only see his swimming belt. Ronald was swimming in the river without airbags. He finally learned to swim without those airbags.

We all learn that practise makes perfect while trying to swim. Lucy is very excited about her first swimming lesson. She removes all her swimming materials to get ready for bed. 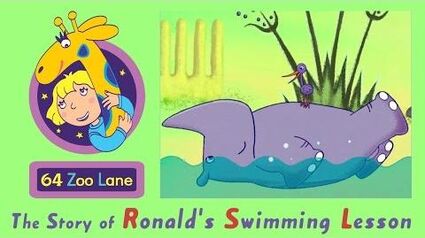