The Story of Ronald and Rosie

Rosie is disgusted by Ronald with his goofy antics. Audrey tries to find a way to meet Rosie.

Lucy gives the animals a vote for a story. They decide to pick a love story.

Ronald was never scared of everything, including nasty animals. He stood up against Victor who is very nasty. He finds another rhino surrounded by posies. Ronald tries to talk to her, but his first attempt failed. He meets up with Audrey to get help. She asks him to deliver her flowers.

Upon delivering flowers, Rosie is distracted and her flowers are crushed by a boulder. Rosie was very upset. The next attempt is when Ronald tries to make a nest much like William does. Rosie enters a big nest, but is not very happy still.

Audrey also gives him advice to become a crooner to fall in love with her. Rosie was disgusted by the nonsense poem, which leads her to be insulted. Audrey almost ran out of ideas. She suggests Ronald to rescue her.

Instead of rescuing Rosie, Ronald gets his nose stuck on a swimming pool. Ronald ends up asking for help from someone. Rosie has to rescue him from the river by crashing into a tree. After rescuing Ronald, Rosie suggests him to rescue her next time. The 2 began taking turns bashing a boulder and finally fell in love.

At the end of the story, Ronald and Rosie fell in love. The birds on their back also fell in love too. We also learn suggestions how to make someone fall in love. All the other animals are impressed by this love story. The monkeys decide to play a game. Lucy started playing a game which involves chasing and kissing someone. The monkeys are frightened by this suggestion. Lucy was able to catch the monkeys during this game. She began giving them a kiss before going to bed. 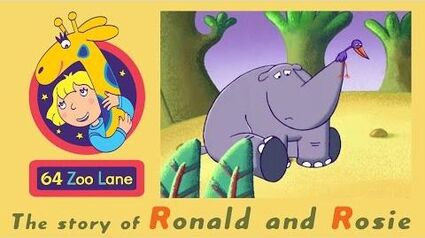