64 Zoo Lane Wiki
Register
Don't have an account?
Sign In
Advertisement
in: Episodes, Season 1 Episodes, Episode that Audrey told the story,
and 6 more

The Story of Ronald and the Tic Tic Bird

Lots of with the other animals are busy talking in a queue. Audrey, an ostrich, is the only animal who isn't talking to the others.

Each animal had a best bird friend, including Ronald, who has a bird that can eat all the nasty ticks on his back. Both of the animals have a great friendship until one day. Ronald gets annoyed by the bird's whistle. He gets also very upset with Ronald in the habit for bashing boulders. This causes the friendship to break up. While Ronald has too many ticks on his back, the Tic Tic Bird is trying to get his friendship back from the other animals.

Lucy is very happy with Audrey for making with the animal friends again. Audrey goes back to sleep by putting her head in the sand. 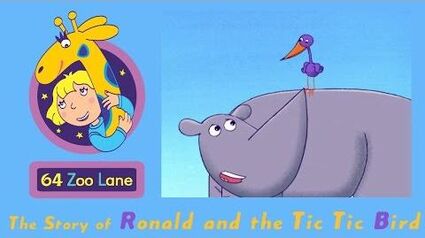